Federal Lawmaker in the eye of the storm, Femi Gbajabiamila has revealed why he bought his wife, Salamatu a brand new G- Wagon as a birthday gift.
The majority leader of the Federal House of Representatives who suffered great vilification for such a show of flamboyance in an economic era of dire needs defended his action in a statement released on Thursday – May 31, 2018.
The subject of recent heaps of abuse claimed the presentation of the multimillion naira gift to his wife on her 50th birthday was meant to be a “family affair”.
He stated in the statement aimed at stopping the tide of unfavorable public opinion against him
“I took the decision far back to present her with a significant gift, she was totally unaware of, to convey in part, the debt of my gratitude for her standing by me through thick and thin,” he said.
“I could never be half the man I am today without her support and unbelievable understanding.”
“Truly, the monetary value of any gift, real or imagined, pales in significance when I consider how much of a rock and pillar she has been to me.”
“As a public officer, one must be held to a higher standard.”
“But I would rather want it to be seen as what it is; an expression of appreciation of deep love for my wife of almost thirty years, rather than one of flamboyance.” 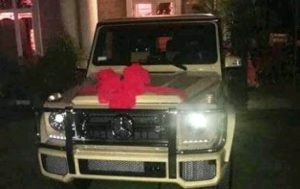 Checks by societynow.ng revealed the “damage control” effort though appeasing to some appears to further fuel public angst in other areas.
Unfavorable comments continue to dog the federal lawmaker battling to secure his 4th term in office.
Trolls on and offline are making it a point to shred his “defence” with interpretations that supports the sway of sentiments against him.
“The truth is that the damage is done. He was caught on video garbed in very expensive attire with his wife and presenting her with a wonder on wheels whose value would change the lives of many in his constituency in no small measure…it will take more than a statement to correct such a damning misstep” a source declared.
Societynow.ng gathered that what makes the whole episode really “bad” for Gbajabiamila is that he is decorated in the image of a very frugal friend of the masses politician – until now.
“And it certainly didn’t help his case that images announcing his intention to dole out keke napep and motorcycles as empowerment programme to members of his constituency circulated along with the video and pictures of his presentation of a brand new G-Wagon to his wife as birthday gift” another source pointed out.