Mr. Osmond Eweka, one of the One of the great grand-children and descendants of late Aiguobasinwin Ovonramwe, Eweka II, Oba of Benin was arrested on charges of fraud after he was accused of scamming hundreds of job seekers out of thousands of dollars by promising them high-paying jobs in New York.

Eweka, 31, who is a prince in the Benin royal family in Nigeria, along with his friend Kamel McKay, 27, allegedly pretended to run two consulting firms in Manhattan telling clients that if they paid a fee they would be placed at various jobs across New York City.

According to prosecutors, some of the jobs Eweka and his accomplice promised their victims were for hotel housekeeping and front desk receptionists.

The men used the popular job-seeking website Indeed.com to find their victims.

The Benin prince who wedded Imade, the granddaughter of Esama of Benin, Sir Gabriel Igbinedion appeared before a judge in a Manhattan court on Thursday and he pleaded guilty to larceny and scheme to defraud.

The duo would reportedly get victims to come to their office for an interview and they were then made to pay a fee (usually between $300 and $700) and promise them jobs.

Prosecutor Catherine McCaw speaking at the Oba of Benin’s in-law’s arraignment said: ‘But in reality, there was no such job,’ 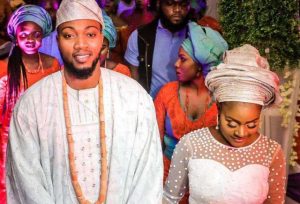 The victims were then sent to different businesses who sent them away as there were actually no openings in these firms.

Eweka and McKay reportedly duped 250 people and didn’t get a legitimate job for a single individual.

According to the New York Times, McKay was arraigned last week and released on $200,000 bail.

Ewaka’s wedding to Imade Igbenedion, the granddaughter of Sir Gabriel Igbenedion was huge and extremely lavish ceremony in 2016.